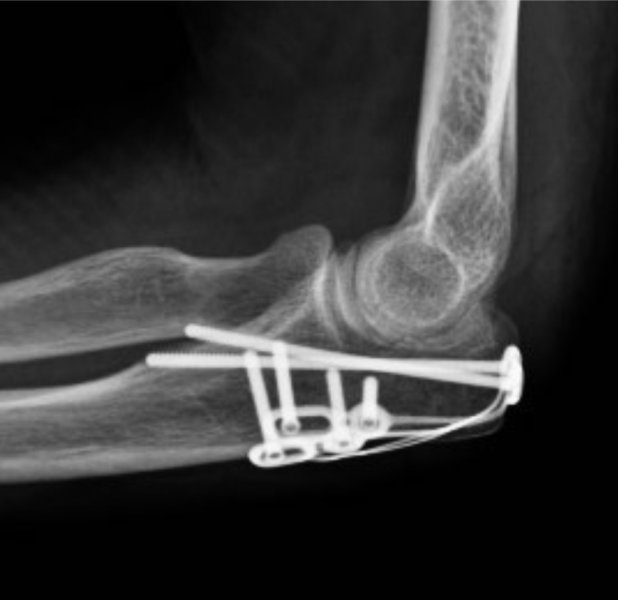 How is the procedure performed?

The operation is performed under a combination of general and regional anaesthesia. The fracture is exposed, the bone fragments realigned and then fixed with screws, a plate and screws or tension band wires.

Surgery allows the displaced bone fragments to be realigned and fixed in a way that restores and maintains the shape of the bone. This is turn allows an earlier and better recovery of function.

Infection: This can occur after any operation where metal devices are implanted in the body. Several measures are employed to minimize the risk of infection including administration of antibiotics prior to the operation, an antiseptic technique and the use of a clean air theatre.

Wound breakdown: The surgical wound may sometimes fail to heal. It is essential to avoid pressure on the elbow until the wound has healed and the sutures have been removed.

Nerve or vascular injury: This is possible but uncommon.

Bleeding : Bleeding may occur during or after surgery.

Numbness around the scar: The nerves that run to the skin around the scar may be injured during the operation leading to a numb patch around the scar. This diminishes in size over time and does not lead to functional problems.

Fixation failure: If the bone is weak due to osteoporosis or fragmented, the plate and screws may not hold well and the fixation may fail.

Malunion: Sometimes the bone may heal in an abnormal position. In some instances the elbow may continue to function well despite a malunion but if function is affected then further surgery may be considered.

Nonunion: Occasionally the fracture may fail to heal. This may require further surgery.

Stiffness: Some degree of stiffness is not uncommon following injury and surgery. In most instances it will resolve as you start moving the elbow with the aid of physiotherapy. Persistent stiffness that fails to resolve over 6-9 months may require further surgery

Implant related symptoms: Metal implants may occasionally irritate the soft tissues or sometimes lead to aching in cold weather. If these symptoms are troublesome, removal of the plate and screws may be considered, but this is usually deferred until 12 - 18 months after surgery.

Following the procedure the surgical wound is covered with a shower-proof dressing.  The dressing should be left undisturbed as far as possible for 14 days.  If the dressing is removed for any reason it should be replaced with a similar dressing or waterproof plaster. The elbow will be wrapped in a padded bandage after surgery. The bandage is usually removed after 24-48 hours and replaced with an elastic support (tubigrip). If ligaments were repaired, the elbow may be protected in a brace. Prior to discharge from hospital a physiotherapist will provide instructions about looking after the elbow.  It is important to keep the elbow elevated for at least 7-10 days after surgery to avoid swelling. You will be advised to protect the elbow by wearing a sling for 4 weeks and intermittently performing movements of the elbow within certain limits. After 4 weeks you may stop wearing the sling and will be allowed to move the elbow actively through a greater range. You may be able to resume driving 4-6 weeks. Strengthening exercises are started after 12 weeks. Vigorous use of the arm or lifting heavy objects should be avoided for at least 3 months. Outpatient physiotherapy will be arranged and may need to be continued for 6-12 months.

An appointment will be arranged for you to be seen at 2 weeks after the procedure.  Follow-up may be required for at least 6-12 months after surgery or until a satisfactory recovery is achieved. X-rays will be performed at intervals to monitor fracture healing.

Please note that this website serves to provide information only, for medical advice please consult with a medical professional.